Here is the phenomenon everyone was waiting for with impatience. Vinyl, the brand new HBO series, produced by Mick Jagger and Martin Scorsese, with a backdrop of sex & drugs & rock’n’roll. Heavy duty stuff!

The pitch? After the blessed years of rock n’ roll, Richie Finestra, owner of a record company on the brink of bankruptcy, is looking for the singer of the group that will save him!

Get ready for a high voltage journey in the New York of 1973, with coke, vinyls, clubs, concerts and feverish nights enhanced by amazing aesthetics and multiple bad boy references. 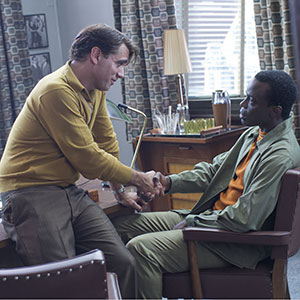 We like: the story of a “Casino in the record industry” as formulated by Mick Jagger and Scorsese. In other words the kind of 70’s history page we were all expecting: the emergence of rock at the dawn of punk, disco and hip hop.

Cool: a first deluxe 2-hour episode, worthy of a feature film… directed by Scorsese himself and aired on the same day as in the US! For once, we are not lagging behind.

Exclusively at 8:55 pm on www.ocs.fr Monday the 15th of February, then as a replay.