The coming out of lesbians is a little bit thanks to her. With her one woman show La Lesbienne Invisible (The Invisible Lesbian): Océanerosemarie was (finally!) allowing gay gals to come out of the closet, and to become a modern day muse, far from the dyke clichés.

With “Embrasse-Moi”, Océane Rosemarie, goes from the stage to the romantic comedy in the spirit of "Notting Hill" or a gay Bridget Jones with Michèle Laroque, Alice Pol as leading stars… A perfect occasion to cast the light on a solar woman who makes customs move with panache, humour and intelligence.

What comes to mind when we tell you that you are the Florence Foresti of lesbians?

I’m fine with it, it even makes me laugh, it’s totally cool. When I created the “The Invisible Lesbian” in 2009, lots of lesbians came to see me because it was a positive spectacle that they could identify with. There was never any positive lesbian whether it was at the theater, the cinema or TV...

Océane Rosemarie, is this you or an imaginary character?

My real name is Océane. I merged my 2nd and 3rd surnames Rose and Marie (totally uncool) to come up with a comic name for the release of my first spectacle. Océane Rose Marie is what one call a “ persona” in theatre vocabulary, who is not really me, nor a character. That is to say it’s me in worse or better, I’m not sure—maybe a mix of the two—in any case it’s me in more, more, more, excessively. I’m less fond of mojitos than she is in real life and I go to bed much earlier !

Tell us about the adventures of Océane Rosemarie...

First of all she existed before the spectacle “The Invisible Lesbian": let’s say from childhood until Océane was 30: this gal with a few issues, who tries to meet other girls, who is still an invisible lesbian at this stage, a little clumsy and all that goes with it …

The film Embrasse-moi is a little bit the continuation of her adventures, like Bridget Jones. One runs into her 5 or 6 years later, she’s come along, had a few stories—jumped the gun from invisible lesbian to visible lesbian—she has evolved. I like the idea there is a follow-up but that not exactly in the same form. I don’t know if one will find her on stage or in the movies next time.

What are you cult romantic comedies?

“Notting Hill”, Cyprien, my co-film writer adores “La Boum”, without forgetting “Pretty Woman” that is the baseline of romantic comedies. I am particularly fan of films by the Farrelly brothers such as “Shallow Hal” which is the film where the hero is an idiot filled with prejudices, who only likes perfect girls, when he himself does not look like much. He falls head over heel for a girl he sees as though she were Gwyneth Paltrow without realizing she is obese…

The idea is that there should be no difference! Putting gay heroes in run-of-the mill straight roles without it being a topic in itself … That is the purpose of the film.

Afterwards, I played in the film with the cliché that lesbians are sometimes quite hysterical when it comes to love. Fantine, who incarnates the stereotype of the ex crazy, who never lets go, manipulative, perverse narcissist, it’s a little bit of a cliché, but I must admit that it amuses be because it happens to be true, slightly psychopath lesbians do exist, you have to admit At the same time, there are many also straight gals who have the same issues!

For once, a gay film that does not talk about coming out !

The problem with films that only focus on the coming-out is that somewhere it makes homosexuals look as though they had a serious problem. Being gay is not just about coming out...But thank you: we are doing fine. We have projects, work, love lives...

I find that it is important to remind people that if gays are set aside it’s not because of their sexual orientation but because of the outlook from the dominating class of straights who consider that it’s the others who are not normal.

One finds lots of gay masculine characters in pop culture and series such as Sex and the City. But not really lesbians...

It’s a little bit double trouble for lesbians who are both gay and women. But things are evolving in France, for example with the character of Camille Cottin, who is gay, in the series Dix pour Cent, in prime time on France 2. The character is very sure of herself, yet not a caricature … Even if in the 2nd season when Camille Cottin sleeps with a man, which really sent all the French lesbians in a tizzy. Too bad having to fall back to this kind of cliché.

For sure: what is the cliché regarding lesbians that disturbs you?

When you think that in fact we are women who have not found “the” right guy…The first thing that two lesbians kissing in the street risk... is to be picked up (contrarily to gay guys who can for example be insulted or beaten up).

If you are somewhat cute and feminine then it’s ten-fold. You become a real fantasy for a straight with 5 guys who come to offer their services. Thanks but we’re doing fine on our own. It’s a die-hard cliché and slightly annoying...

Some advice for a Parisian lesbian.

I suggest self-confidence, telling herself she is beautiful, smart, just as good as the others (certainly as good as straights) and that she has a chance because she has something different that allows her to have an outside look on society. It can be an obstacle, especially at the beginning, but in the end it will always be an asset. The best thing that happened to me was being a lesbian !

I continue playing my spectacle “Chaton Violent”, at the Festival d’Avignon from the 7th to the 31st of July at the Théâtre des Béliers.

I also feel like developing another film or acting for a film director.

The cinema was a true revelation—I adored being an actress.

“Embrasse-moi” to be released starting Wednesday the 5th of July 2017. 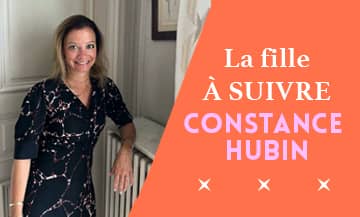